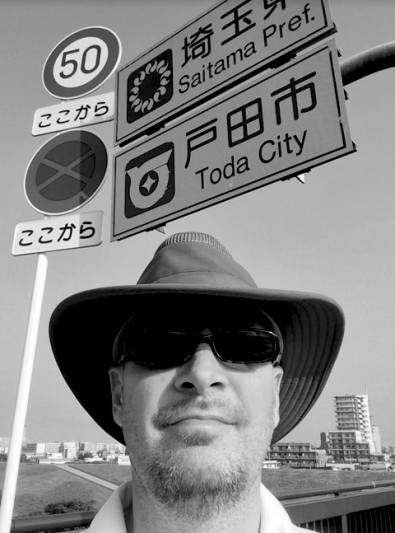 Glenn Kardy’s background is in journalism (San Francisco-style), and has worked as both a reporter and an editor for major newspapers on both sides of the Pacific. He has lived in Japan since 1995. Glenn founded Japanime in 1998 as an anime goods and toy shop to bring the fun of Japanese culture overseas. After watching people develop an interest in Japan through comics and animation, Glenn returned to his roots — journalism and publishing — and the Manga University imprint was born. He talks to Patrick Sherriff about his work.

Patrick Sherriff: Tell me about Manga University. It’s not a real university, is it?

Glenn Kardy: I get that question a lot — is Manga University a real university? The answer is both no, and sort of. First and foremost, it’s my company’s publishing imprint. For 20 years, we’ve been creating books that teach all sorts of fun things about Japanese culture, from art to cooking to history to sports.

But we do more than just that. We also hold workshops at our office in Kawaguchi, host visiting scholars in our homestay program, and have conducted several courses on behalf of Temple University Japan.

Plus, we recruit university professors and academic specialists to help us with all of our projects. “Samurai Confidential,” for instance, was written by a Japanese historian and translated by a Stanford University librarian specializing in Asian studies. Leading professors at Waseda University, the University of California, and St. Olaf College in Minnesota have served as consultants on our ever-expanding “Kanji de Manga” language-learning series. And the recipes for the three-volume “Manga Cookbook” series, which has received two awards from the American Library Association, were written and extensively tested by a licensed Japanese nutritionist and chef.

Oh, and we also have a lineup of trademarked Manga University apparel. So you can show your school spirit by wearing a shirt for a university you never actually attended.

Do you have to be knowledgeable about manga to understand Japanese culture?

I don’t think a person needs to have extensive knowledge of manga to understand — and enjoy — Japanese culture. But it’s important to at least be aware that manga has played an important role in shaping modern Japan.

Manga is used for more than mere entertainment in Japan. It’s an everyday, wholly accepted form of communication and instruction. Take a walk through just about any Japanese locale and you’ll find signs of manga everywhere. From storefronts to schools to city halls.

Construction sites post pictures of manga characters wearing hard hats and warning passersby to “keep out.” Magazine racks in hospital waiting rooms are filled with illustrated brochures in which manga characters discuss the dangers of smoking, offer exercise tips, and explain how to cut your cholesterol. The Japanese Self-Defense Forces even use manga imagery to explain their mission and recruit young men and women to join the “moe militia,” so to speak!

How do you go about publishing your books? Who and where are your customers?

The first 10 books we published were English-language editions of the “How to Draw Manga” series we licensed from another Japanese publisher. Those books went on to sell hundreds of thousands of copies worldwide, and established us as a leading resource for artists interested in learning Japanese cartooning techniques.

We could have expanded our catalog simply by continuing to license other publishers’ books for English translation, but I was more interested in creating our own content. So we began looking at other subjects that could be taught using manga. The first book to be released under the Manga University imprint was “Kana de Manga: A Fun, Easy Way to Learn the ABC’s of Japanese.” A few months later, a “Kanji de Manga” companion volume went on sale. I wrote the text for those two books, and Chihiro Hattori did the delightful illustrations. That was back in 2004, when I was still a journalist struggling to let go. Nowadays, I’m ecstatic to let others do the writing, and the series has grown to 10 volumes.

Meanwhile, we began developing books on other topics as well. I mentioned Japanese cooking, history and sports, and we’ve also published several more “How to Draw Manga”-type books. Our customers are those fans throughout the world who are so inspired by their favorite manga and anime series that they tell one another, “Japan is so cool! I want to draw like that. I want to read and write Japanese. I want to cook Japanese food. I want to BECOME Japanese!” We try to tap into that enthusiasm. Our market is what librarians like to call “YA” or “young adult,” primarily kids between 12 to 18. But just like Studio Ghibli films appeal to all ages, so do our books.

So you are on the cutting edge of the whole Cool Japan thing. Has the market changed over the last decade? Where’s it heading?

I’ve always liked that phrase, “Cool Japan.” In the mid-2000s, I was was commissioned by the Tokyo Foundation to do a series of interviews with manga and anime industry pioneers. My assistant and I spoke with Chiba Tetsuya (“Ashita no Joe”), Monkey Punch (“Lupin III”), Satoshi Kon (“Perfect Blue”), and many others. We called the series “Super Cool.” It was a real thrill, and it also made me realize how little I had accomplished myself! Those interviews really inspired me to create original works rather than simply license other publishers’ books.

Things definitely have changed since then, though. I’m sure Japan’s “cool” factor will continue to impress overseas audiences. I just don’t know if printed manga will be part of it.

Like you, Patrick, I started my career as a newspaper reporter. I often joke that I was smart enough to get out of newspapering before the industry tanked. But indie publishing is heading in the same direction. It’s hard to sell $10 paperbacks to a generation of smartphone users who expect content to be free.

But I love making books so much, I’m not ready to stop trying.

An industry insider told me that in indie publishing in Japan, as elsewhere, Kindle is king, the only difference being 80% of commercial publishing is manga. So, how does manga on e-readers sound to you?

Oh, definitely — ebooks are here to stay. Most of our publications are already available in ebook form. In fact, I’m fairly certain we were one of the first publishers to sell English-language manga in the Kindle store. Amazon launched its first Kindle in late 2007, and our “Kanij de Manga” series was there within a year. I’m personally a big fan of ebooks — I have lousy eyesight, and being able to adjust the font size is a blessing.

I’d like to weigh in on what I feel is a misconception about ebook pricing, though. I often hear customers say that ebooks should cost less than their printed counterparts. After all, they argue, there are no printing costs, no warehouse fees, and no shipping charges for ebooks. That’s all true, but what those customers might not realize is that it takes a considerable amount of time, effort, and money (and talent!) to code an ebook. And one size does not fit all: The code we write for a Kindle has to be rewritten for Apple devices and other e-readers. Plus, the code needs to be updated to keep up with the new hardware. Sometimes I think it’s easier to just print a book and be done with it!

That’s great, Glenn. Just a final question then, where can people go to find out more about you and Manga University?

Patrick Sherriff publishes a monthly newsletter highlighting good fiction published in English about Japan. He lives in Abiko with his wife and two daughters.

One thought on “Extra credits for Cool Japan: An interview with Manga University founder Glenn Kardy”