I raid the BookOff secondhand book chain outlets within sortie distance of Abiko as often as I can to liberate English language books from their shelves. Recently though, it’s been getting progressively slimmer pickings. When I can’t find anything good in English, I go to the art books section and every now and then find a gem, especially one that introduces me to an artist, usually Japanese, I’ve not heard of before.  My latest find was a retrospective of works by Kigen Nakagawa (1892-1972). I’ve included 10 fairly representative works by him from his early days to his last.

He went off to study art in Paris under Matisse from 1919-1921 and after his return to Taisho-era Japan was hailed as the next big thing. He did his thing, trying to take the latest from Europe and apply it to the Japanese art scene. He went dormant in the late 1930s through the 1940s (although he served in Manchuria as a war painter, apparently). And then emerged after the war, eager to find a more Japanese way to express himself.

I liked his Taisho era portraits, particularly of women. Though my favourite is Portrait of a Woman from 1917 (above) before he’d embarked on his European voyage. But whadda I know? 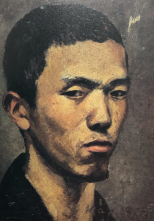 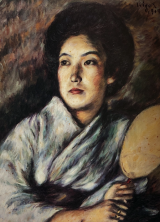 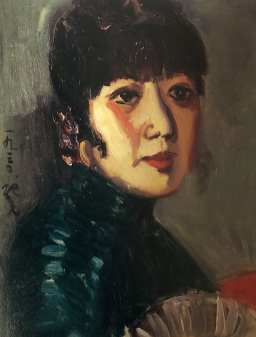 Village at the Mountains 1955

Download my starter library for free here – http://eepurl.com/bFkt0X – and receive my monthly newsletter with an original painting, and book recommendations galore for the Japanophile, crime-fiction-lover in all of us.