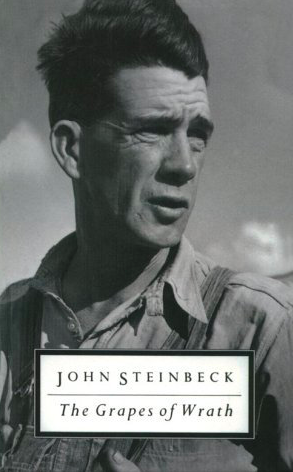 I was supposed to have read this in university and I think I did at least skim read it (it is 619 pages long, quite a handful for my oh-so-busy younger self), but of course when I came to re-read it now in my late 40s, it’s an entirely different book. When you don’t have to read books and underline important bits to regurgitate in essays, the experience of reading is far more pleasurable, or in the case of this book, more rewarding, as pleasurable seems the wrong word to describe the story of a family and a people driven to starvation.

This time round I was moved by the tale of the Joads, particularly Tom and Ma Joad battling against all the odds. Sure, there were interesting parallels with other Great Works of American Fiction if you were so inclined to look for them, but there was also a moving tale of family and an ear for dialect and storytelling that I’d somehow failed to appreciate when I was younger. Some of the chapters demonstrated quite brilliant observation of character, while others were sweeping in their explanations of a historical moment that defined a generation, all in an authentic voice. And while Steinbeck’s sympathies for the victims of capitalism were clear, he didn’t turn the beneficiaries of the system into crude villains, nor blithely imagine there was a simple, doctrinaire solution to the hungry 30s.

The introductory essay by Robert DeMott was intriguing too, (I certainly didn’t read that when I was a student), which told of Steinbeck’s years of research that went into the novel, the 100-day writing dash to complete the 200,000-word first draft and the toll of struggling to do justice to the migrants’ true stories took on his first marriage.

A helluva journey, all told.