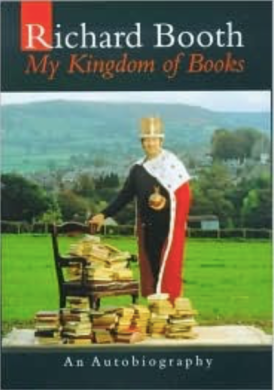 It was an obit for Richard Booth in the New York Times this month that alerted me to the existence of this book (and Mr Booth) and after finishing his autobiography yesterday, I was left with mixed feelings: on the one hand delighted to have made his acquaintance, but on the other, deeply saddened to learn of his death. Booth really was a splendid muddle of contradictions. He was the well-off Oxbridge graduate who bought himself a castle, but was the entrepreneur that turned a single secondhand bookshop in the backwaters of Wales into the Hay on Wye book town that headlined a global movement; he despised university elites yet loved the educated; hated politics yet welcomed Arthur Scargill as a hero to his home, he was a king who loved the underdog, a self-publicist who wanted only the best for his community, a defender of local life, but promoter of global culture. An amateur who outdid the pros. In 1977, he declared Hay on Wye an independent kingdom and himself as its king: he a was a joker who was seriously ahead of his time. In short, he was the Monty Python of the bookselling world.

The king is dead. Long live the king.