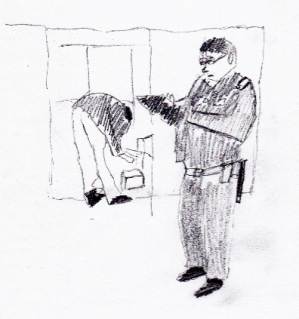 Everyone was still in bed this morning when I realised something was wrong.

I’d gone downstairs to put the toaster on for the eldest’s breakfast. Odd. The downstairs was freezing cold. Cold was not particularly noteworthy in our uninsulated, undouble-glazed bunker, but I can’t ever remember seeing my own breath. A sliding door to our front room was open that is always shut. The curtain was half open. The bug screen was lying neatly on its side against the persimmon tree. The sliding window was wide open. Odder still, a triangle of glass the size of a hand or elbow was missing from the pane of glass. An earthquake? Couldn’t be. A burglary? But nothing seemed to be missing.

Inspector Ichinose of the Chiba Prefectural police was the first to arrive at the crime scene. He strode purposefully around the garden to where the window had been broken. He adjusted his Los Angeles Fire Department baseball cap on his head and got straight down to it.

“This is the window?”

“This is the bug screen?”

His partner arrived with a hard, square briefcase. From it he retrieved a feather duster and began dusting the window.

The inspector turned to my wife.

“May I look around the house?”

The first break in the case came minutes later. The inspector lay prone and took out a clear plastic sheet, taping it to the floor. A footprint in the middle of the room? Odd, we always wear slippers.

He seemed happy to hear that.

“This has an interesting tread mark, a pair of shoes, maybe?”

In fact, the tread matched exactly.

He sat down on our youngest’s child seat at the dining table and began filling out a form. We gave him our names, ages, and timeline for the home invasion. We’d gone to bed at midnight, reading till maybe 1am.  The only other thing we knew for sure was that at some point in the night our youngest had clambered out of her bed and gone to the toilet upstairs before climbing into our bed, nestling in next to mum.

The inspector took this all down, then when he realised I wasn’t the official head of household as he had assumed, he had to take it all down again on the right form with my wife’s name as head of household.

As he wrote, a cop in uniform, Nakamura-san, introduced himself and asked if he could wander around and draw a plan of the house.

I had put the coffee on, but now with three policemen in the house, I was doubtful whether there was enough for everyone in the pot.

Then a fourth officer popped his head round the genkan entrance hall. He was the youngest of them all. He took his shoes off and tip-toed dramatically along the edge of the dining room in his socks, while being filled in by Inspector Ichinose. I nodded at the clipboard ninja and my wife fought back laughter.

The other detective was in the front room now and was kneeling on our sofa dusting for more prints. He found two. I said that was good, but the room was frequented by dozens of people, it being used as a classroom most days. There then followed some discussion between the two sleuths. They decided to print our fingers and palms. My wife’s wedding ring was too tight to remove. After further discussion, they decided we didn’t have to remove our wedding rings to be printed.

But it was all academic. They knew who the burglar was.

“We know who the burglar is,” the cop said over coffee. The inspector and his partner had gone back to prefectural headquarters and now the only police presence was Nakamura-san and his sock-wearing junior, both of Higashi-Abiko department.

“Wow. How did you deduce that?”

Nakamura-san doodled random crosses on the back of a report form and drew a single circle around them all, then marked a bold cross in the centre of the circle.

“Well, we’ve been looking for him for a while. This fits his MO. He’s neat. The bug screen, placed by the tree. And the glass from the window, he took that with him. We think he works in the building trade.”

“What did he want to steal? The Nintendo DS and iPhone were left on the table.”

“What do they all want? Cash and jewellery, that’s it. Everything else is traceable or too much trouble to explain away. But he’s a coward. He must have been disturbed or heard a noise and then ran away.”

I sipped my coffee.

“So, our seven-year-old going to the toilet in the middle of the night saved our lives?”

“You can tell her that I’m sure she did.”

Patrick Sherriff, an Englishman who survived 13 years working for newspapers in the US, UK and Japan. Between teaching English lessons at his conversation school in Abiko, Japan, with his wife, he writes and illustrates textbooks for non-native speakers of English, releases Hana Walker mystery novels, short stories, essays and a monthly newsletter  highlighting good fiction published in English about Japan. Saku’s Random Book Club is his latest project to spend more time with books.